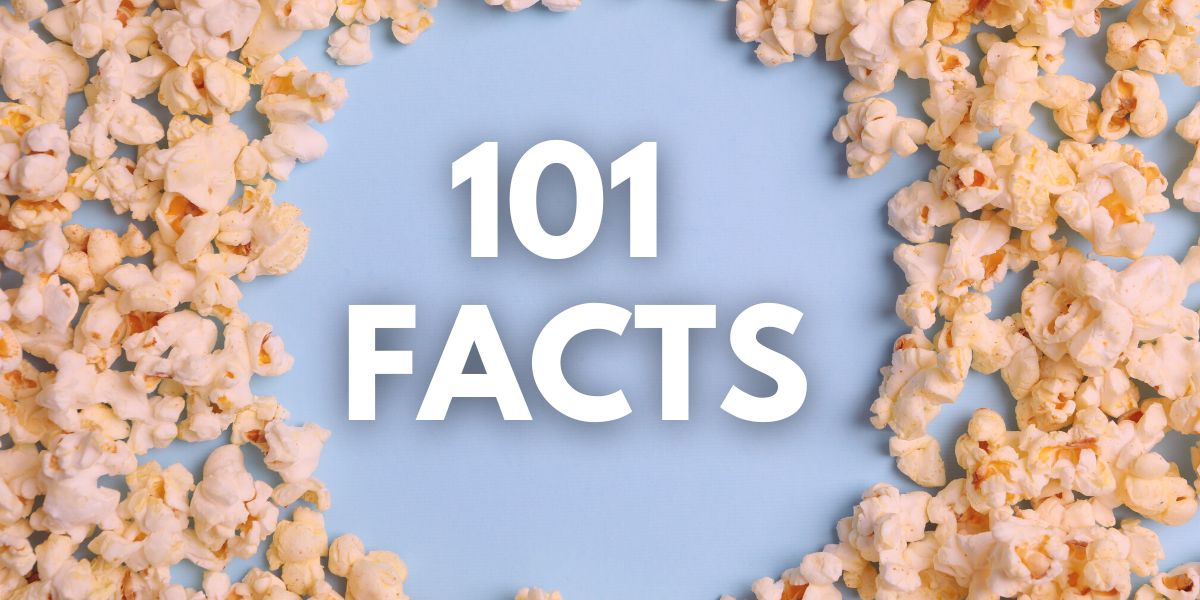 We all know that popcorn tastes great and that once you start munching on it, it’s hard to stop.

But do you know where popcorn originates from? Or how long have movie theaters been selling popcorn?

Read on to find out the answers to these questions and to discover lots more interesting facts about the nation’s favorite snack.

The History of Popcorn

2. Popcorn used to be eaten for breakfast with milk and sugar.

3. The oldest popcorn kernels were found in a cave in New Mexico.

4. Popcorn soared in popularity during WWII when sugar was rationed.

5. Popcorn was a popular snack during the Great Depression because it was cheap and nutritious.

6. Aztec Indians used to decorate their clothes with popcorn.

7. In the 18th century, popcorn was cooked with molasses and rendered fat.

8. The first popcorn machine was created in 1885 in Chicago by Charles Cretors.

9. Microwavable popcorn was invented in 1982 in Pillsbury.

13. Before popcorn machines were invented, popcorn was made on the stove or in fireplaces.

14. Popcorn sales suffered when televisions made their way into people’s homes.

15. The word “popcorn” was first added to Bartlett’s Dictionary of Americanisms in 1838.

16. The Aztecs named the sound of popping kernels as “totopoca”.

Read more about the Culture that Introduced Popcorn.

20. The average American eats 47 quarts of popcorn per year.

22. 3.8 million pounds of popcorn is eaten during the annual Super Bowl.

23. Americans produce and eat more popcorn than any other nation.

24. Each bag of popcorn contains around 2% of old maids.

30. Popcorn sales increased during the height of the covid pandemic. Jolly Time popcorn reported sales of microwave popcorn increasing by between 40% and 50%.

31. During covid, grocery stores bought 80% to 90% more raw popcorn than before.

32. Store-branded popcorn accounts for 14% of all popcorn sales.

33. Millennials buy more popcorn than any other generation.

34. Cheese is one of the most popular popcorn flavors. 16% of people love white cheddar on their popcorn while 11% prefer regular cheddar.

37. Popcorn is one of the five most cost-effective sources of whole grains.

39. If you put popcorn in the freezer, it doesn’t freeze. It will keep it fresh, though.

40. During the cooking process, popcorn kernels can pop up to 3 feet into the air.

41. Popcorn is used as Christmas decorations, including tree garlands.

42. You can revive popcorn that’s gone stale by putting it in the oven and warming it up.

44. Indiana has its own official state snack – popcorn!

45. Popcorn is the only type of corn that pops.

47. More popcorn is sold in the fall than in any other season.

49. Puffcorn is a toddler-safe alternative to popcorn.

50. Classic butter and salt is the most popular popcorn flavoring.

52. Smartfood popcorn sold more popcorn than any other brand between May 2020 and May 2021.

53. The most popular brand of popcorn is Orville Redenbacher.

54. David Rush and Jonathan Hannon currently hold the world record for the most amount of popcorn thrown and caught in the mouth. They managed an impressive 54 pieces in 2020.

55. Popcorn balls were often given as gifts in the 19th and 20th centuries.

56. There have been some strange popcorn flavors launched, including dill pickle and ice cream (yes, together!), loaded baked potato, burgundy wine and cheddar cheese, and eggnog.

57. Native Americans used to use popcorn to make beer and soup.

58. The record for the most amount of popcorn eaten in one sitting was set in 2021. An impressive 28.5 24 oz servings were consumed in just 8 minutes.

59. The nation’s least favorite type of popcorn is plain.

60. Most modern microwaves come with a ‘Popcorn’ button. But you shouldn’t use it, as it typically cooks popcorn for too long and burns it.

61. The scientific name for popcorn is Zea Mays Everta.

62. There are different colors of popcorn – yellow, white, blue popcorn, purple, and red.

63. You can buy hulless popcorn, but it’s not really hulless; the hulls are just smaller.

64. The most common shapes of popcorn are mushroom and butterfly.

65. Unpopped kernels should not be stored in the fridge as they’ll dry out and won’t pop.

66. Many schools use popcorn for fundraising.

68. You can eat popcorn every day as long as you stick to plain, air-popped popcorn or use healthy oils to cook it in.

69. Caramel popcorn was first introduced in the 1890s.

70. You can add food dye to popcorn to make it whatever color you like.

71. It was only in the 1930s that movie theaters started to sell popcorn.

72. Movie theaters banned moviegoers from eating popcorn in 1949 because it was too noisy.

74. In 1994, AMC and Sony announced that they were no longer going to pop their popcorn in coconut oil because it was too unhealthy. They started using canola oil instead.

75. Despite this, most movie theaters today cook popcorn in coconut oil.

77. Movie theaters put flavacol on their buttered popcorn, which is a type of fake butter seasoning.

80. Movie theaters make more money from selling popcorn than anything else – including tickets.

84. Research has found that popcorn can help people lose weight.

85. Popcorn is considered a safe food for diabetics.

86. Popcorn can keep your heart healthy because it’s a whole grain.

87. There is more iron in popcorn than there is in beef and spinach.

89. Popcorn can help to relieve constipation because it’s high in fiber. There is around 3.6 g of fiber in 3 cups of popcorn.

93. Popcorn is addictive and is featured on a blacklist of addictive food.

94. The Atkins diet allows you to eat popcorn.

95. Popcorn can be eaten on a Keto diet.

96. Popcorn can lower the risk of some types of cancer.

97. Popcorn is on the USDA child nutrition program.

98. Popcorn can relieve stress because it is high in carbs and has a low glycemic-index.

101. You can get 15% of your recommended daily fiber amount from one serving of popcorn.

Now you know everything that there is to know about popcorn. We’ll sure you’ll agree that it’s a fun and interesting snack with a whole lot of history.

How to Plan the Perfect Popcorn Wedding Bar