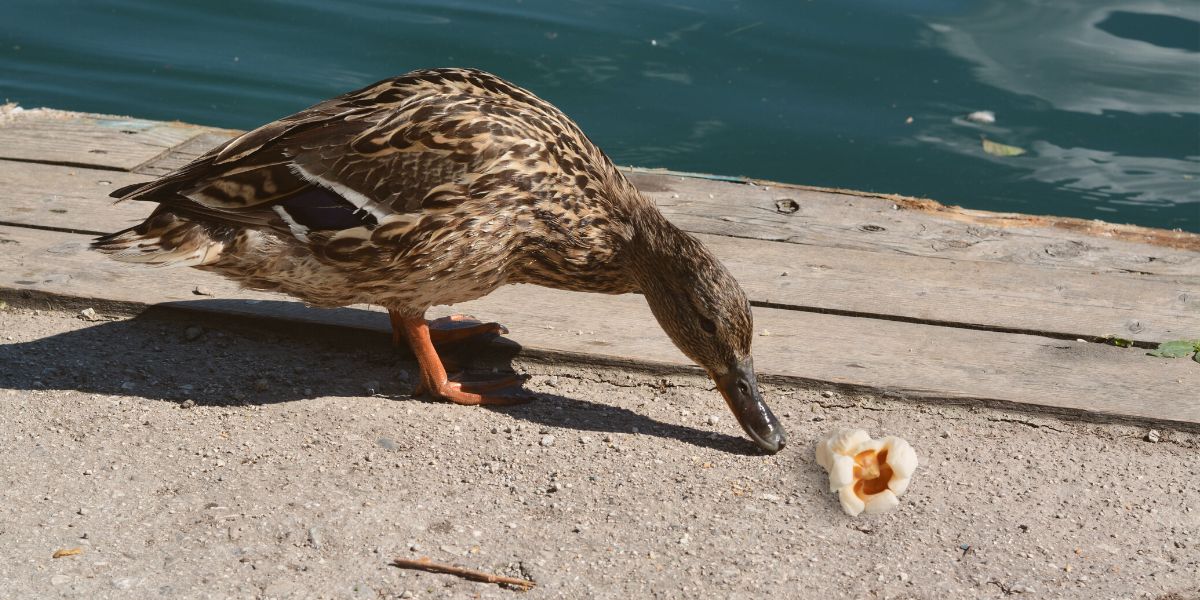 As anyone who keeps ducks or feeds them at a local pond knows, they will eat almost anything! But should ducks eat popcorn?

The simple answer is NO, popcorn is not safe for ducks to eat.

There is something very magical about watching the little feathered bottoms of ducks as they run to get some food you’ve thrown, but we need to make sure that the food is healthy for them.

Popcorn is one of those foods you may think, “Yeah, sure, that’ll be ok; after all, ducks eat corn all the time.” But popped corn can create some pretty serious and potentially fatal health problems for ducks.

In this article, we will explore the reason why corn, once it has been popped to make popcorn, is not a great food for ducks.

Contents show
1 Why is there Corn in Most Duck Foods?
2 Popcorn is GMO-Free
3 Do Not Over Feed
4 Why is Popcorn Different from Corn Kernels?
5 Popcorn is a Choke Hazard for Ducks
6 Sugar and Salt is Bad For Ducks
7 Lowered Nutritional Value
8 Popcorn and the Ecosystem
9 To Sum Up

Why is there Corn in Most Duck Foods?

It is true that virtually all bird feed that you buy in the store contains corn and that it is seen as a dietary staple throughout the avian world. So most certainly, you can feed ducks unpopped kernels of corn, as long as they are completely natural and with no coatings or salt added.

In fact, popcorn kernels are almost certainly better than normal corn kernels because most corn has been cross-pollinated with GMO (Genetically Modified) corn these days. Whereas the kernels used for popcorn are genetically diverse enough that they do not cross-pollinate with the controversial GMO varieties.

Do Not Over Feed

As with all things, you should never overfeed ducks with corn kernels.

It can make them very indigestible and can even impact their crop (the sack at the base of the throat that the food initially goes into to be ground up for digestion).

Corn should make up no more than 25% of a duck’s total feed, and this figure is much lower for a duckling’s feed.

Why is Popcorn Different from Corn Kernels?

Corn, once it’s been popped to make popcorn, on the other hand, can be extremely dangerous for ducks, and here’s why:

Popcorn is a Choke Hazard for Ducks

Due to the size and shape of popcorn, it creates a serious choke risk and can even lodge in their throat for days, making it difficult for the poor duck to eat. It is also very abrasive, so even if the popcorn makes it down the gullet, it can actually damage the esophagus.

Sugar and Salt is Bad For Ducks

Popcorn, unless it is organic air popped popcorn that has no additives, sugars, or salt, can also be very toxic for ducks. The sugars could cause obesity and diabetes, the salts, if taken in high doses, could cause kidney failure, and the additives and preservatives could be carcinogenic.

Even though corn is highly nutritious for ducks, because of the bulk once the corn is popped, it actually lowers the nutritional value per volume. Which, when swallowed whole, fills the duck up without giving it adequate vitamins and minerals that are essential to maintain a healthy life.

In other words, the duck will swim away thinking it’s full when in fact, it is simply packed out with popcorn. Imagine how quickly you would fill up if you swallowed all your popcorn whole without chewing first.

Popcorn and the Ecosystem

Popcorn is equally bad for the ecosystem of a pond. The food that is not eaten by the ducks sink to the bottom of the pond and rots there. This can pose a serious health risk to all the animals that live in or on the pond, including the ducks themselves, as over time, the pond becomes more and more clogged with rotting material.

Popcorn that has sugars and salts added to it poses further threats to the ecology of the pond. As the sugars and salts dissolve into the water, they create imbalances in the pH and saline levels which is bad news for this delicate environment.

Whilst it is a lovely thought to share your favorite snack with the animals you love, in this case, you would be doing more harm than good.

In short, corn, once it has been popped into popcorn, is a definite NO for ducks. 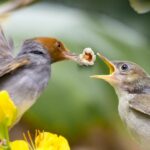 Kernel-Less Popcorn – Everything You Need to Know 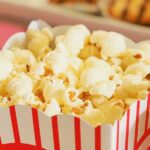 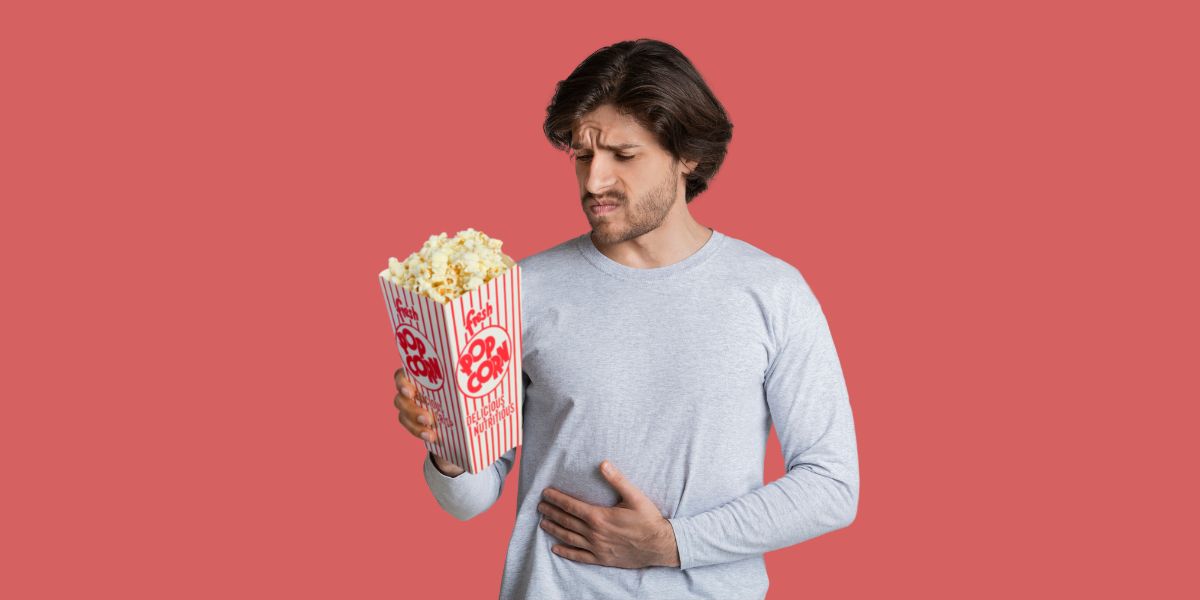 Is Popcorn Good For Constipation?

Popcorn often gets a bad rap for being the cause of constipation. But it is actually a good food to eat if you want to avoid constipation or are already suffering from it. 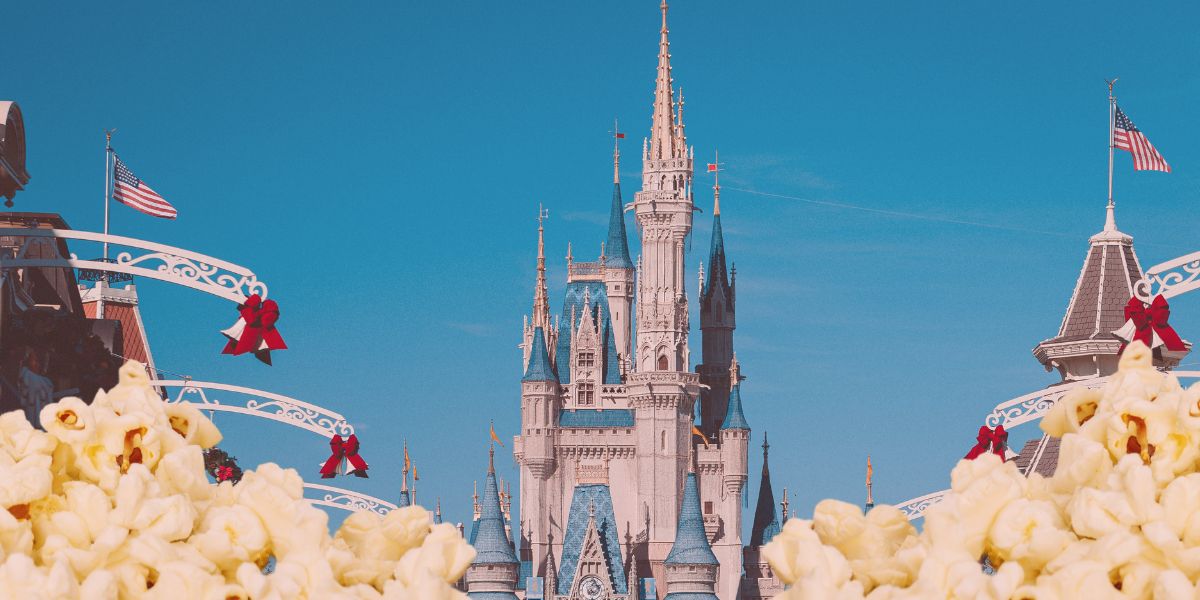 Everything You Need to Know About Disneyland Popcorn

Disneyland is well-known for serving popcorn with a difference and it’s sold in some bright, bold, and iconic popcorn buckets. Let’s discover more about popcorn at Disneyland and find out what makes it so great. 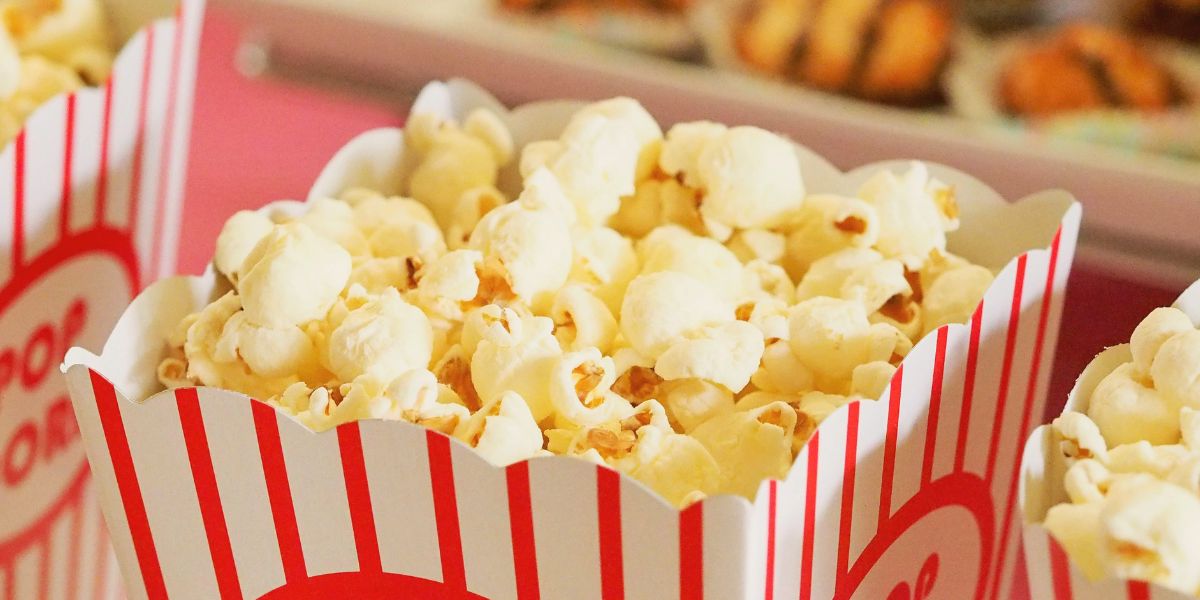 Kernel-Less Popcorn – Everything You Need to Know

Learn everything about kernel-less popcorn.