Foxes are well-known for scavenging through trash cans for food. And it’s good news if they stumble across some leftover popcorn, as it makes a nice treat for them.

As carnivores, foxes eat small animals that they’ve hunted, such as birds, rabbits, and rodents. They like to chow down berries and fruit, too. But they can also eat unsweetened and unsalted popcorn without facing any problems.

So, let’s find out more about foxes and popcorn and whether you should feed it to them.

Is it Safe to Feed Popcorn to Foxes?

Yes, there’s nothing in plain air-popped popcorn that will do any harm to a fox as the only ingredient it contains is corn.

However, animal experts advise against humans feeding foxes popcorn and other foods for several reasons, including:

For these reasons, it’s only safe for a fox to eat popcorn if they stumble across it while hunting for food.

Is Popcorn Healthy for Foxes?

Some foxes naturally eat corn and other grains as part of their normal diet. From a nutritional point of view, popping kernels and turning them into popcorn isn’t any different from a fox eating corn.

Popcorn is rich in fiber and contains folate, thiamin, phosphorus, vitamin C, and magnesium. These nutrients are healthy for humans, but foxes don’t need high amounts of them.

Instead, foxes get the majority of the nutrients they need from meat protein. To ensure that a fox is as healthy as possible, foxes should be allowed and encouraged to eat their natural diet as much as possible. This means not leaving out popcorn and other treats for them.

Some popcorn flavorings and toppings aren’t as dangerous to foxes as others. Foxes have a soft spot for cheese, so cheese-topped popcorn is generally safe for them to eat. Butter popcorn is also okay for foxes in small amounts as long as standard butter is used and not a butter flavoring or substitute.

Flavorings and toppings which are particularly dangerous to foxes include:

Popcorn kernels are hard and tough. If you’ve ever accidentally popped one into your mouth, you’ll know how difficult they are to bite.

It’s not a good idea for foxes to eat popcorn kernels because they could get stuck in their teeth. There’s also a risk that a fox could choke on a popcorn kernel.

Is Popcorn Dangerous for Foxes?

It depends. Plain, air-popped popcorn is generally okay for a fox to eat. Even some flavored popcorn is okay.

However, popcorn is dangerous for foxes when it’s eaten in large quantities, has unsafe toppings or flavorings on, or when it’s not popped.

The good news is that foxes are very good at identifying foods that are and aren’t safe for them to eat. So, if they stumble across some dangerous popcorn they’re unlikely to tuck into it.

But for safety purposes, if you do have excess popcorn that you don’t want to eat, repurpose it rather than dumping it in the trash where a fox could get it.

Some fun things you could do with old popcorn include:

Can I Hand-Feed Popcorn to a Fox?

No, you shouldn’t hand-feed popcorn or any other food to a fox.

Popcorn isn’t a natural part of a fox’s diet so you shouldn’t encourage foxes to eat it. If you do, there’s a risk that they’ll develop a fondness for it and will keep coming back to you for more.

Popcorn is a filling food as it contains a lot of fiber. But foxes need a diet rich in protein to stay healthy which is why you shouldn’t encourage them to eat popcorn.

You also shouldn’t hand-feed popcorn to a fox because it tames them. Foxes are wild animals and shouldn’t feel comfortable approaching humans. You could also put them in danger by doing this. Just because you’re a nice friendly human, doesn’t mean the next human they walk up to will be.

Yes, foxes can eat corn. Some foxes in the wild opt to eat grains, including corn, as part of their diet. Others will shun corn in favor of more nutritious and tasty food.

You don’t need to worry if a fox in your garden eats a little bit of plain air-popped popcorn. But, you shouldn’t ever go out of your way to give a fox popcorn as this goes against all their natural instincts. Our best advice if you spot a fox is to admire it from afar and let it seek out its own food.

Next, check out whether other animals can eat popcorn:

What Animals Can Eat Popcorn?

What Wild Animals Can Eat Popcorn?

What Type of Rodents Can Eat Popcorn? 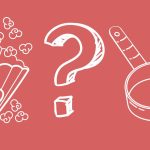 How Many Cups of Popcorn in a Bag? 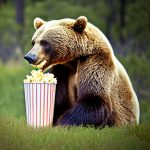